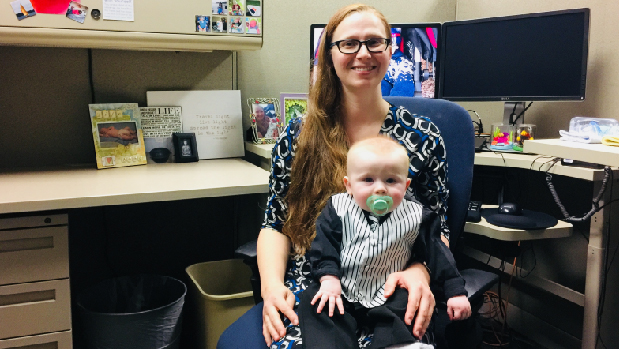 Stefanie Zier worked for the Health Care Authority (HCA) for two and a half years before promoting to a management position at another agency. After leaving HCA, she discovered she was pregnant.

As her pregnancy progressed, Stefanie worked with her new agency to see if they offered the flexibility of teleworking or an “infants at the workplace” program in anticipation of her son’s birth. Unfortunately, they were not able to offer telecommuting more than one day per month, or offer opportunities for her to bring her baby to work.

Stefanie needed an employer who was more flexible. Her son’s father had a job with frequently varying hours, and wouldn't always be able to leave work if their baby became sick or needed taken to an appointment. Stefanie was the only parent who could leave work to care for their son.

She knew HCA offered teleworking and a program for new parents to bring their baby six weeks to six months old to work. She inquired with HCA if she could return to her previous position. Though it would be a demotion in job class and a hit financially, it wasn't a hard choice for her to make. The director of her old division and section supervisor were able to create a position Stefanie could return to, and welcomed her back (and Finn, too) with enthusiasm. She feels fortunate she could transition back to work full-time when Finn was just two and half months old.

“I feel incredibly supported in having a healthy work/life balance here,” said Stefanie. “My son loves being at HCA, and he has many friends!”

Finn is so popular, he spends up to four hours a day visiting people in various programs across the agency. He attends meetings without her regularly, witnessing financial forecasting, Medicaid operations, and even executive planning.

Finn’s social and emotional development has progressed to where he is meeting his developmental milestones early, because he meets so many people, hears so many words and has such diverse social experiences. When Finn isn’t attending meetings, he sleeps in his bassinet in Stefanie’s cubicle or plays with his toys on the floor next to her desk while she works.

Stephanie is also thankful for the building facility support for new mothers. HCA has designated nursing rooms for breastfeeding, offers changing tables and allows parents to place their own diaper pails in certain bathrooms. Because she could bring Finn to work, she didn't have to pay for child care for a newborn and was able to use cloth diapers, actually saving the money she would have spent on these things if she stayed at her management position.

One thing she did not anticipate when she returned was the amount of validation from other coworkers who are mothers, fathers and grandparents. Being a first time parent, she worried about doing things “right.” Staying at home with Finn, Stefanie feels she wouldn't have had the same amount of support and encouragement.

“I could not have asked for a better environment in a workplace, from my director, supervisor and my colleagues. We already have our first visit scheduled for after he graduates from the program, because Finn loves it at HCA so much. He will miss his friends here.”

HCA's Infants at the Workplace Program supports new natural parents, adoptive parents, or legal guardians transitioning back to work with babies. Employees must be in permanent status and have worked for the agency longer than six months to participate in the program, and are required to submit an individual plan for supervisor and human resource approval.