Apple Health has “given her such peace of mind.” 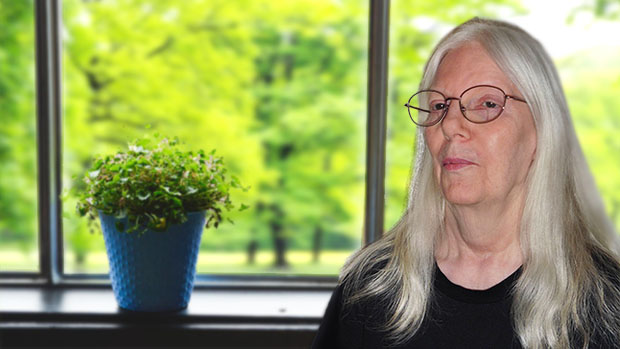 Anne Bybee is 72 years old and resides in a HUD facility in Bremerton. She spends her days decorating her home, surrounding herself with her favorite things. According to her sister, Caralyn, her favorite hobby is “decorating the house with each different season--plus extra ones. She changes everything every month.”

Caralyn, who assumed responsibility for Anne’s care when their parents died, described their lives before and after Washington Apple Health (Medicaid).

Anne has worked since the age of 16 at minimum wage jobs.  She worked at a day care center for over 30 years.  She lived in a rental, paid her bills, but did not have health care.  Not able to afford the day care’s insurance, the family took care of her health needs.  The result was that she only sought help when she was desperately ill. “She only called us when she was really in pain,” said Caralyn.

When going to the doctor she could only pay him $25 a month and routinely went without food so she could buy her medicine and feed her cats. Feeling embarrassed she couldn’t afford her own health care, Anne didn’t tell her family, preferring not to burden them. Caralyn eventually discovered what was happening and insisted on paying, taking it out of her family’s household budget. “This made [Anne] feel extremely bad,” said Caralyn. “She wanted to take care of herself.”

Caralyn helped Anne find an insurance plan that required her to go to a low-income clinic. At first it was difficult for Anne to see a new doctor, but she was finally being treated for aliments she didn’t even know she had, including high blood pressure, high cholesterol, and a thyroid condition.  She really liked the doctors, they understood she was low-income and were willing to work with her, and they were able to prescribe less costly generic drugs. She was finally being taken care of.

When Anne’s insurance company stopped offering health coverage in Washington State in 2015 and she was left without coverage, she and Caralyn turned to the Department of Social and Health Services, which helped Anne with housing and food assistance, and enrolled her in Apple Health.

Life for Anne is now a dramatically different story.

With Apple Health coverage she sees her doctor regularly. She can now fill her prescriptions for free or for a modest copay, no longer choosing between buying food and medication.

Financially, it’s also made a huge difference for both Anne and Caralyn’s family. “We’re extremely relieved,” said Caralyn. “It’s taken the pressure off … Now [if] something happens to me, she’s taken care of.”

Having affordable health coverage has also had a profound effect on Anne: “It’s given her such peace of mind,” said Caralyn. “She’s a different person.”