Apple Health “gives me a sense of security” 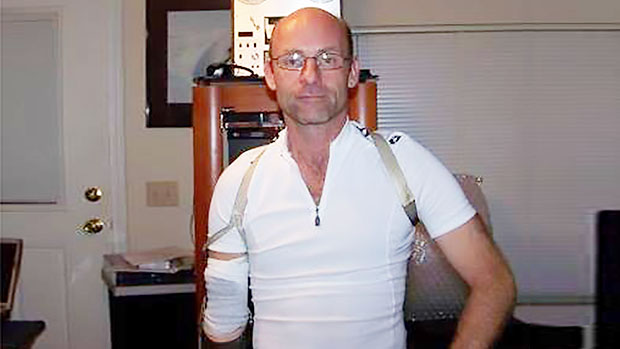 Roger Collings was hard-working and an ambitious young man who worked in the printing industry in the 1990s. By age 25 he was running his own printing company in Seattle. “I operated a printing press,” recalls Roger. “Printing was the career for me. I enjoyed it, I was good at it.”

Roger lost his arm in an industrial accident in 1991.

While the injury was devastating, Roger returned to work after a year of recovery with a prosthesis. However, declines in the printing industry slashed his annual income from $40,000 to $20,000.

“I started paying for my own health care and … nothing was covered because I had a $12,000 deductible,” he said. “And then my hours got cut to where I was only making $10,000 a year, and I had to quit paying for [my health coverage].”

Eventually Roger’s job was eliminated altogether, and when he needed a new prosthesis, he couldn’t afford it.

Roger also suffered from frequent infections in his limb.

“I had to take whatever money I had and go to the doctor with it, and then I would have to pick up the pieces from there,” he said.

To be able to afford antibiotics, Roger cut back on food, put purchases on credit, and forewent anything that wasn’t an absolute necessity.

“It was so expensive to see a doctor to get that prescription,” he said. Soon, medical care became so prohibitively expensive for Roger that he resorted to calling friends for any leftover antibiotics when his arm became infected.

When Roger began experiencing pain in the rotator cuff in the shoulder of his good arm, he faced the need for surgery—and complete debilitation.

Then in 2014 Roger signed up for Washington Apple Health (Medicaid).

Apple Health paid for physical therapy for his rotator cuff, so he no longer needs expensive and debilitating surgery.

Before he enrolled in Apple Health, the cost of three months of physical therapy “was almost more than what I was making,” Roger said.

He’s doing better financially, too. Roger doesn’t have a $12,000 deductible, so he’s no longer paying a large percentage out of his check for health care.

And that prosthesis he needed? “The fact that I’m getting a new prosthesis, I believe it opens up new opportunities … It gives me a better outlook on life, it gives me a more positive attitude, which will help me be more successful in life,” he said.

Roger recently landed a part-time job fixing vintage audio equipment, which happens to be his passion.

Reflecting on his experience with Apple Health, Roger is grateful: “I feel much more secure about my future and my well-being … It gives me a sense of security. [The Affordable Care Act] is a great idea to help people out … it definitely helped me out.”