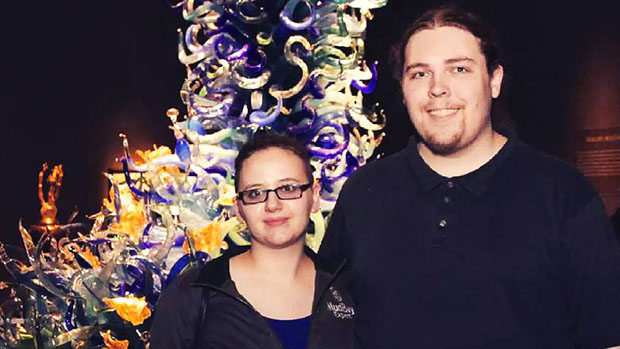 Ashleigh DeBuse and her partner moved to Olympia for a fresh start. It was a chance to find better jobs, be closer to family, and move away from the small town she grew up in.

They moved in June and immediately began searching for work. By September, they were still struggling to find stable employment. Ashleigh managed to get part time jobs working for multiple retailers, all at minimum wage, with no health care benefits offered. Soon they depleted their savings, and had to rely on Ashleigh’s wages and the generosity of family and friends to get by.

She and her partner were in no financial position to have children, and the possibility of getting pregnant worried Ashleigh. She had been to a family planning clinic to consider birth control options, but found she had a different doctor each visit. The birth control pill prescriptions from doctor to doctor were inconsistent, disrupting her hormonal balance.

Working multiple jobs, it was hard to have a consistent schedule to take the pill at the same time every day. Sometimes she was unable to pick up her monthly prescription during regular pharmacy hours, putting her at risk for pregnancy with possible gaps between dosages. She wanted to switch to an implant type of birth control, but found it would cost $800 up front and out-of-pocket.

Though she was able to stay on her father’s health insurance during that time, the premiums under her father’s plan were upwards of $400 a month – which neither of them could afford.

“The premiums were unrealistic for my income level, and his,” said DeBuse. “They were completely unaffordable for us. He has four children, including myself.”

She heard of the Washington Apple Health (Medicaid) program from a family member of her partner, and decided to apply online to see if she was income eligible.

“It was such a relief for me to qualify for Apple Health. I didn’t know what I would do without health insurance, since I certainly couldn’t afford my father’s plan. I didn’t want to be uninsured or incur tax penalties.”

Having Apple Health brought stability to Ashleigh’s life. She found a regular doctor who was understanding of her issues, and the implant cost was fully covered. She no longer had to be stressed about accidentally missing a pill, or race to the pharmacy before she ran out of her prescription.

Her partner found a job in state government in December. Now that they’re living more comfortably with her partner’s steady employment, Ashleigh was able to go back to school to complete her associate degree, with the goal of transferring to The Evergreen State College for her bachelor’s degree.

The stability of having health insurance for Ashleigh has brought them both peace of mind.

“It was such a relief to have insurance and be able to afford it,” said DeBuse.