Due to COVID-19, HCA’s lobby is closed. Learn more about your customer service options. 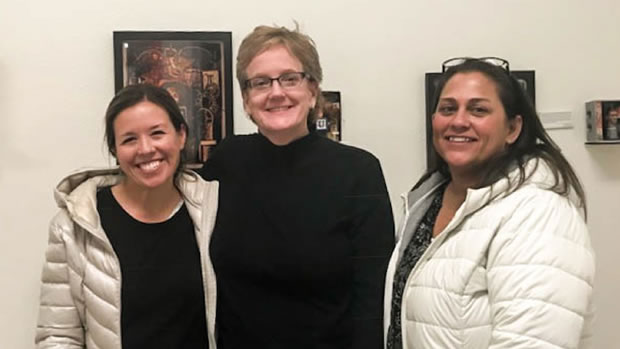 Deborah Morris (center), a graphic designer at the Washington Health Care Authority (HCA), has been a working artist since she could hold a crayon. Early works included such memorable pieces such as “Tabby” and “My Family.” These early images were more on the abstract side since she was only 4 or 5. Critics gave the works rave reviews.

Deborah was born and raised in the Bronx, New York. She studied art all through primary school and became the class artist. She won an art program scholarship to St. John’s University in Queens, N.Y. while still in high school.

Her college art life began at the College of New Rochelle, N.Y. and finished at Arizona State University. Deborah graduated with a B.F.A. in Fine Art Photography. She participated in several group and solo exhibitions in college and at local Arizona galleries.

After her first keystroke on an early black and white Macintosh, she knew she needed to know more about computer graphics. She returned to school in 1994 for design and computer graphics, receiving an Associate of Arts degree in Visual Communications.

Tired of the Arizona heat, Deborah set out for Washington in 2004 and settled in Olympia. Her job search took her to HCA, where they were hiring a temporary graphic designer to help create products for annual open enrollment. Thirteen years later, she’s is now a senior graphic designer, and one of the fortunate people who have been able to work in a creative field she enjoys.

HCA has a wide variety of products requiring the talent of the graphic design team Deborah is part of. The team works on and produces hundreds of products every year. Some of Deb's favorite things to work on are postcards, posters, and t-shirts.

In her spare time, Deborah creates art in many different mediums, including painting, dimensional pieces, and photography. She is always looking for opportunities to create new and interesting art. She recently had an art show at Olympia's fall Artswalk event entitled the “12 Olympians”, which were individual assemblages of the Greek gods and goddesses photographed and printed as fine art digital prints.

HCA values creativity in the workplace and couldn't function without the support of the graphic design team. Thanks to the designers, HCA is able to create user friendly, well organized and visually appealing products in print and on the web, for internal and external clients. From Apple Health booklets, to fillable forms, to posters and mass letter mailings, they have helped create each one of these hundreds of products, some of them distributed thousands of times per year.